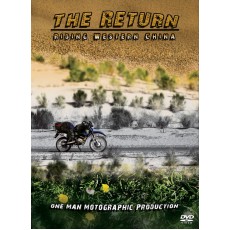 "The use of drawings to fill in where the camera couldn’t go was brilliant. But what made the film excellent was the personality of the narrator. His lack of formality made us feel like we were taking the trip with him, rather than just being onlookers." - Robert Pirsig author of Zen and the Art of Motorcycle Maintenance

After a tragic brush with death and stupidity in the previous year's attempt to reach Kashmir from Chengdu, we return to do it again. Packed with sights and sounds of Western China, "The Return" is more than a motorcycle travelogue or documentary.

As a one man production, direction and editing unit, Carl Parker, through use of photo, video, and artwork, brings us to places, cultures and experiences rarely ever seen by travelers in one of the most amazing parts of the world - Western China.

At over 4500m, stay the night with a family of Tibetan yak herders. At -130m we'll explore some of the ancient cities of the Silk Road and find out a little about how people have survived in the world's largest deserts for thousands of years. More than this though, there's a story to tell.

Where amazing land and mindscapes meet, learn about a rider pushed to the limits of his body and mind and what he went through to get there and come back again.

• At over 4000m/asl, stay the night with a family of Tibetan yak herders. From one extreme to another, at -130m we'll explore some of the Silk Road’s ancient cities and how people survived on these lands for thousands of years.

• Learn about a rider pushed to the limits of his body and mind as well as what he went through to get there and come back again.

• Also included: “The Return” KMZ file giving you detailed GPS tracks, waypoints and geotagged images from the film and much more to help you plan your trip to China!

There are no reviews for this product.
Write a review
BadExcellent